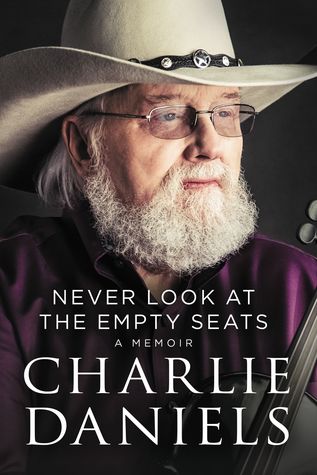 Never Look at the Empty Seats by Charlie Daniels was published on October 24th, 2017 by Thomas Nelson. Synopsis: Few artists have left a more indelible mark on America’s musical landscape than Charlie Daniels. Readers will experience a soft, personal side of Charlie Daniels that has never before been documented. In his own words, he presents the path from his post-depression childhood to performing for millions as one of the most successful country acts of all time and what he has learned along the way. The book also includes insights into the many musicians that orbited Charlie’s world, including Elvis Presley, Bob Dylan, Willie Nelson, Tammy Wynette and many more.Charlie was officially inducted into The Country Music Hall of Fame in 2016, shortly before his 80th birthday. He now shares the inside stories, reflections, and rare personal photographs from his earliest days in the 1940s to his self-taught guitar and fiddle playing high school days of the fifties through his rise to music stardom in the seventies, eighties and beyond. Charlie Daniels presents a life lesson for all of us regardless of profession: “Walk on stage with a positive attitude. Your troubles are your own and are not included in the ticket price. Some nights you have more to give than others, but put it all out there every show. You’re concerned with the people who showed up, not the ones who didn’t. So give them a show and…Never look at the empty seats!”

About Charlie Daniels: Charlie Daniels is an American multi-instrumentalist, singer-songwriter, businessman, and actor. He is known for his contributions to country, bluegrass, gospel and Southern rock music. He is perhaps best known for his number one country hit “The Devil Went Down to Georgia” which won a Grammy for Best Country Vocal Performance by a Duo or Group in 1979 as well as single of the year at the Country Music Association Awards. He married his wife, Hazel, in 1963. Together, they have one son, Charlie Daniels, Jr.

My thoughts: This excellent autobiography of Charlie Daniels traces his life from the very humble beginnings in a small Southern town to his induction into the Country Music Hall of Fame. In addition to his music career and family life, he shares with you many events throughout his life and his faith.  He is not only a wonderful singer but a remarkable song writer as well.  Overall, a very informative read. ** I received a complimentary copy in exchange for my honest and unbiased review. **