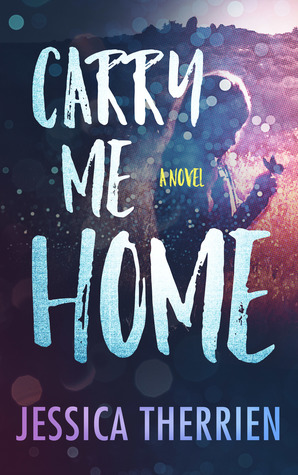 Carry Me Home by Jessica Therrien was published on September 26th, 2017 by Acorn Publishing and is a contemporary young adult novel. Lucy and Ruth are country girls from a broken home. When they move to the city with their mother, leaving behind their family ranch and dead-beat father, Lucy unravels. They run to their grandparents’ place, a trailer park mobile home in the barrio of San Jose. Lucy’s barrio friends have changed since her last visit. They’ve joined a gang called VC. They teach her to fight, to shank, to beat a person unconscious and play with guns. When things get too heavy, and lives are at stake, the three girls head for LA seeking a better life.But trouble always follows Lucy. She befriends the wrong people, members of another gang, and every bad choice she makes drags the family into her dangerous world.
Told from three points of view, the story follows Lucy down the rabbit hole, along with her mother and sister as they sacrifice dreams and happiness, friendships and futures. Love is waiting for all of them in LA, but pursuing a life without Lucy could mean losing her forever. Ultimately it’s their bond with each other that holds them together, in a true test of love, loss and survival.

About the author: Jessica Therrien is the author of the young adult series Children of the Gods. Book one in the series, Oppression, became a Barnes & Noble best-seller shortly after its release. Her trilogy has been translated and sold through major publishers around the world, such as Editions AdA (Canada), EditionsMilan (France), and SharpPoint Press (China). Aside from her Children of the Gods series, Jessica is the author of Carry Me Home, a YA contemporary fiction novel, and a kid’s picture book called, The Loneliest Whale. Her award-winning stories can also be found in a published anthology of flash fiction. Jessica currently lives in Irvine with her husband and two young sons. She is working on an adult novel and a middle grade fantasy series. Website – Goodreads

My thoughts: Carry Me Home is a fast-paced novel that takes you along on a family journey into darkness and redemption. An eye-opening page turner that weaves together family ties, friends, hope, self-destructiveness, and second chances. This story will stick with you long after you read the last page. Therrien has created a novel that is both realistic and one that most can relate to. Overall, a good contemporary young adult novel. ** I received a complimentary copy in exchange for my honest and unbiased review. This post contains affiliate links and I will be compensated if you make a purchase after clicking on my links. **