Did the news about Prince Harry and Meghan Markle’s engagement have you excited about a Royal Wedding? I found a few books to read that are full of ball gowns, love, and high society romance. These books are sure to keep my excitement alive until the wedding at Windsor Castle in May!

The Glittering Court by Richelle Mead (The Glittering Court Book Series) Big and sweeping, spanning from the refined palaces of Osfrid to the gold dust and untamed forests of Adoria, The Glittering Court tells the story of Adelaide, an Osfridian countess who poses as her servant to escape an arranged marriage and start a new life in Adoria, the New World. But to do that, she must join the Glittering Court. Both a school and a business venture, the Glittering Court is designed to transform impoverished girls into upper-class ladies who appear destined for powerful and wealthy marriages in the New World. Adelaide naturally excels in her training, and even makes a few friends: the fiery former laundress Tamsin and the beautiful Sirminican refugee Mira. She manages to keep her true identity hidden from all but one: the intriguing Cedric Thorn, son of the wealthy proprietor of the Glittering Court. When Adelaide discovers that Cedric is hiding a dangerous secret of his own, together they hatch a scheme to make the best of Adelaide’s deception. Complications soon arise—first as they cross the treacherous seas from Osfrid to Adoria, and then when Adelaide catches the attention of a powerful governor. But no complication will prove quite as daunting as the potent attraction simmering between Adelaide and Cedric. An attraction that, if acted on, would scandalize the Glittering Court and make them both outcasts in wild, vastly uncharted lands. Goodreads   –   Amazon 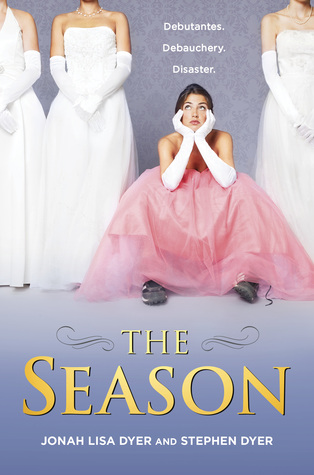 The Season by Jonah Lisa Dyer and Stephen Dyer Megan McKnight is a soccer star with Olympic dreams, but she’s not a girly girl. So when her Southern belle mother secretly enters her in the 2016 Dallas debutante season, she’s furious—and has no idea what she’s in for. When Megan’s attitude gets her on probation with the mother hen of the debs, she’s got a month to prove she can ballroom dance, display impeccable manners, and curtsey like a proper Texas lady or she’ll get the boot and disgrace her family. The perk of being a debutante, of course, is going to parties, and it’s at one of these lavish affairs where Megan gets swept off her feet by the debonair and down-to-earth Hank Waterhouse. If only she didn’t have to contend with a backstabbing blonde and her handsome but surly billionaire boyfriend, Megan thinks, being a deb might not be so bad after all. But that’s before she humiliates herself in front of a room full of ten-year-olds, becomes embroiled in a media-frenzy scandal, and gets punched in the face by another girl. The season has officially begun but the drama is just getting started. Goodreads  –  Amazon

Rebel Belle by Rachel Hawkins (The Rebel Belle Book Series) Harper Price, peerless Southern belle, was born ready for a Homecoming tiara. But after a strange run-in at the dance imbues her with incredible abilities, Harper’s destiny takes a turn for the seriously weird. She becomes a Paladin, one of an ancient line of guardians with agility, super strength and lethal fighting instincts. Just when life can’t get any more disastrously crazy, Harper finds out who she’s charged to protect: David Stark, school reporter, subject of a mysterious prophecy and possibly Harper’s least favorite person. But things get complicated when Harper starts falling for him—and discovers that David’s own fate could very well be to destroy Earth. With snappy banter, cotillion dresses, non-stop action and a touch of magic, this new young adult series from bestseller Rachel Hawkins is going to make y’all beg for more. Goodreads   –   Amazon

** This post contains affiliate links and I will be compensated if you make a purchase after clicking on my links. **