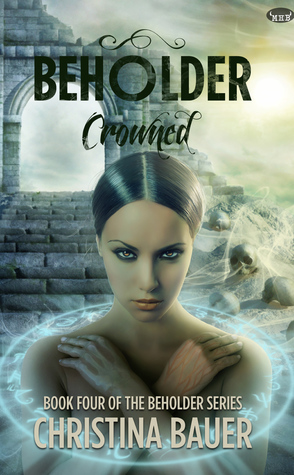 Crowned: Beholder Book #4 by Christina Bauer was published on November 28th, 2017 by Monster House Books, LLC. and is a young adult sci-fi fantasy novel. At last, Elea has found the love of her life. Unfortunately, the evil Tsar Viktor is about to unleash an army of twisted mages bent on killing everyone Elea cares about… including the man who’s stolen her heart. So what’s a powerful witch to do? Why, fight back, of course! Elea goes on a mission to find the Sword of Theodora, the only weapon that can destroy Viktor. That’s challenge enough, but on the eve of battle, Elea realizes that her true enemies may be far more powerful than even Viktor: The deities Oni and Yuri could be out to destroy her as well. With major battles brewing on two fronts, Elea’s not sure that she’ll win, but with true love to inspire her, she’s certainly ready to fight.

About the author: Christina Bauer knows how to tell stories about kick-ass women. In her best selling Angelbound series, the heroine is a part-demon girl who loves to fight in Purgatory’s Arena and falls in love with a part-angel prince. Across the lifetime of her series, Christina has driven more than 500,000 ebook orders and 9,000 reviews on Goodreads and retailers. Bauer has also told the story of the Women’s March on Washington by leading PR efforts for the Massachusetts Chapter. Her pre-event press release—the only one sent out on a major wire service—resulted in more than 19,000 global impressions and redistribution by over 350 different media entities including the Associated Press. Christina graduated from Syracuse University’s Newhouse School with BA’s in English along with Television, Radio, and Film Production. She lives in Newton, MA with her husband, son, and semi-insane golden retriever, Ruby.

My thoughts: Crowned is the fourth book in the Beholder Book Series and can easily be read as a standalone novel. I enjoyed reading this fast-paced novel that is full of action and lots of drama. Bauer has written a story that flows seamlessly meshing the characters from previous novels and current ones with the story line making you want to turn the pages quickly to find out what happens next. The perfect ending to an intriguing book series that is perfect for anyone who loves a good young adult paranormal fantasy novel.  ** I received a complimentary copy in exchange for my honest and unbiased review. This post contains affiliate links and I will be compensated if you make a purchase after clicking on my links.**