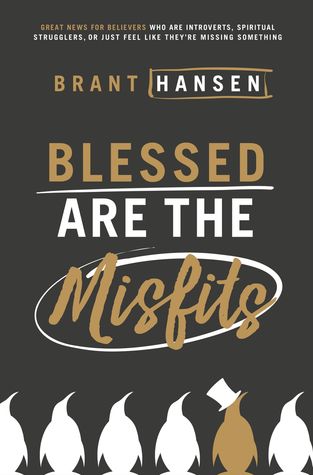 Blessed Are the Misfits By Brant Hansen was published on November 28th, 2017 by Thomas Nelson. Synopsis: While American church culture (and American culture at large) seems largely designed for the extroverted, it’s estimated that half of the American population is introverted, and they’re often left wondering how, even if, they fit in the kingdom of God. As one of them, popular radio host Brant Hansen brings news. It’s wonderful, refreshing, and never-been-said-this-way-before good news.

In his unique style, Hansen looks to answer questions that millions of people carry with them each day:
* If I don’t relate to God as emotionally as others do, is something wrong with me?
* How does one approach God, and approach faith, when devoid of the “good feelings” that seem to drive so much of evangelical church culture?
* How does God interact with those who seem spiritually numb?
* Is the absence of faith-based emotion a sign of that God has moved on or was never there?
* What if we aren’t good at talking to people about our faith, or good at talking to people at all?
* What if I’m told I’m too analytical, that I “think too much”?
* Where does a person who suffers from depression fit in the kingdom? Is depression a sure sign of a lack of faith?
* This book is good news for people who are desperately looking for it. (And for their loved ones!)

It’s also for those who want to believe in Jesus, but inwardly fear that they don’t belong, worry that don’t have the requisite emotion-based relationship with God, and are starving for good news. Blessed Are the Misfits is going to generate discussion, and lots of it. It’s simultaneously highly provocative and humbly personal. It’s also leavened with a distinct, dry, self-effacing humor that is a hallmark of Hansen’s on-air, writing, and public speaking style.

About the author: Brant Hansen is an author, nationally syndicated radio host, and advocate for healing children with correctible disabilities through CURE International. He’s won multiple “personality of the year” awards for his work on his offbeat and quirky radio show which airs on more than 200 stations. His podcast with his friend and radio producer, Sherri Lynn (“The Brant and Sherri Oddcast”) has been downloaded millions of times. He leverages his radio platform to advance the work of CURE International, a global ministry of hospitals and programs that offer healing for children with correctible disabilities. His first book, Unoffendable, prompted a national discussion on the idea of forgiveness, and our culture’s embrace of self-righteous anger. His second book, both provocative and very personal, and will be released in November of 2017: Blessed are the Misfits: Great News for Those Who Are Introverts, Spiritual Strugglers, or Just Feel Like They’re Missing Something. In this book, Hansen addresses his own, and many others’, inability to “feel God’s presence”, and how God might Himself feel about that. Brant speaks to groups/conferences/churches when his schedule allows. He has written for CNN.com, The Washington Post, U.S. News and World Report, The South Florida Sun-Sentinel, Relevant, and numerous other outlets on matters as varied as public policy, culture, sports, Asperger’s Syndrome, and faith. He’s been a game inventor, fronted a modern rock band, still dabbles in singing and songwriting. He’s traveled extensively throughout the world for CURE and other groups, including multiple trips to CURE’s hospital for women and children in Afghanistan. He has been married for 27 years to Carolyn, and they have two grown children.

My thoughts:  Blessed Are the Misfits is an informative read that takes you through an intriguing exploration of why many Christians feel like they do not fit into the traditional church culture and shows other ways to express your faith. Hansen helps show you that many things we often see is that Jesus spends time with the outcasts. Showing you that everyone is a child of Christ and can accept his love through their faith. I really enjoyed reading this eye-opening book that really make you think outside the box. Overall, a good read that is full of information. ** I received a complimentary copy in exchange for my honest and unbiased review. This post contains affiliate links and I will be compensated if you make a purchase after clicking on my links.**

2 thoughts on “Blessed Are the Misfits By Brant Hansen – Review”