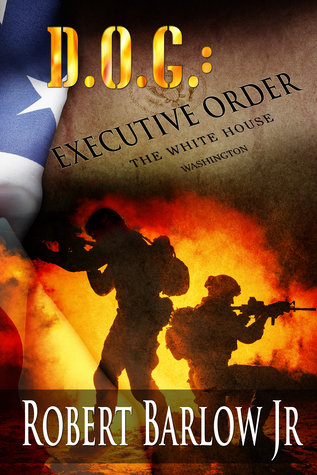 D.O.G.: Executive Order by Robert Barlow Jr. was published December 9th 2017 by CreateSpace Independent Publishing Platform. To save his presidency and assure re-election, an arrogant, power-hungry president must end his illegal connections with a terrorist leader before that leader follows through on his threat to make public their relationship. Gunnery Sergeant Zach Hinson and Sergeant First Class Jason Jones, sniper team D.O.G., are ordered to assassinate the terrorist leader, but for the president, it is not enough. Fearful the sniper team will let slip their involvement, the president agrees to the unthinkable and makes a deal with another terrorist. But, his effort to save his presidency becomes a war when it is learned the man with whom he has colluded has failed to act on his agreement.

About the author: Twenty-seven years serving as a Soldier has given me an appreciation for just how great this country is, and the ultimate respect for those who sacrificed so we could remain a free nation. In few other countries could someone such as myself formulate ideas into stories and allow those ideas to flow from my mind through my fingers and to the keyboard. Should writing never become my career, I will still write as long as I love creating and telling my stories. Website  –  Goodreads

My thoughts: D.O.G.: Executive Order is a fast-paced read that is loaded with action and suspense. This thrilling read is sure to keep you on the edge of your seat never knowing what is lurking just beyond the next page. Barlow has created intriguing characters with backstories that are sure to draw you in from the beginning. The plot is creative and unique with many twists and turns that will having you second guessing along the way.  A writing style that is descriptive and flows perfectly making this a story that is sure to stay with you long after you finish reading. * I received a complimentary copy in exchange for my honest and unbiased review. This post contains affiliate links and I will be compensated if you make a purchase after clicking on my links.*