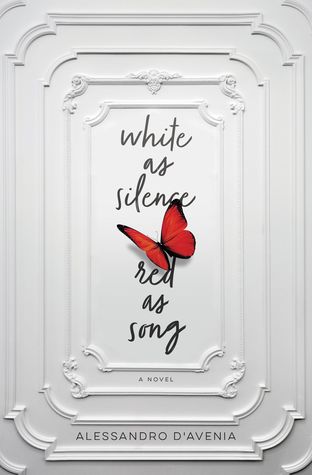 White as Silence, Red as Song by Alessandro D’Avenia – Published September 4th, 2018 by Thomas Nelson (first published January 2010). International bestseller White as Milk, Red as Blood, has been called the Italian The Fault in Our Stars.

Leo is an ordinary sixteen-year-old: he loves hanging out with his friends, playing soccer, and zipping around on his motorbike. The time he has to spend at school is a drag, and his teachers are “a protected species that you hope will become extinct,” so when a new history and philosophy teacher arrives, Leo greets him with his usual antipathy. But this young man turns out to be different. His eyes sparkle when he talks, and he encourages his students to live passionately, and follow their dreams.

Leo now feels like a lion, as his name suggests, but there is still one thing that terrifies him: the color white. White is absence; everything related to deprivation and loss in his life is white. Red, on the other hand, is the color of love, passion, and blood; red is the color of Beatrice’s hair. Leo’s dream is a girl named Beatrice, the prettiest in school. Beatrice is irresistible – one look from her is enough to make Leo forget about everything else.

There is, however, a female presence much closer to Leo, which he finds harder to see because she’s right under his nose: the ever-dependable and serene Silvia. When he discovers that Beatrice has leukemia and that her disease is related to the white that scares him so much, Leo is forced to search within himself, to bleed and to be reborn. In the process, he comes to understand that dreams must never die, and he finds the strength to believe in something bigger than himself.

White as Milk, Red as Blood is not only a coming-of-age story and the narrative of a school year, but it is also a bold novel that, through Leo’s monologue – at times easy-going and full of verve, at times more intimate and anguished – depicts what happens when suffering and shock burst into the world of a teenager, and the world of adults is rendered speechless.

About the author: Alessandro D’Avenia, born in 1977 in Palermo, holds a PhD in classics and is a high school literature teacher and screenwriter.

My Review: White as Silence, Red as Song is a contemporary young adult romance. I was drawn in from the start and could not put this down because I had to know how the story was going to end. A lovely story of love and loss that is sure to send your emotions on a roller coaster ride with many ups and downs. You will fall in love with the characters from the start and the storyline will keep you guessing until the end. A story that will leave you wanting more.  White as Silence, Red as Song is a lovely young adult read.  ** I received a complimentary copy in exchange for my honest and unbiased review. This post contains affiliate links and I will be compensated if you make a purchase after clicking on my links.**