We Rule the Night by Claire Eliza Bartlett

Two girls use forbidden magic to fly and fight–for their country and for themselves–in this riveting debut that’s part Shadow and Bone, part Code Name Verity.

Seventeen-year-old Revna is a factory worker, manufacturing war machines for the Union of the North. When she’s caught using illegal magic, she fears being branded a traitor and imprisoned. Meanwhile, on the front lines, Linné defied her father, a Union general, and disguised herself as a boy to join the army. They’re both offered a reprieve from punishment if they use their magic in a special women’s military flight unit and undertake terrifying, deadly missions under cover of darkness. Revna and Linné can hardly stand to be in the same cockpit, but if they can’t fly together, and if they can’t find a way to fly well, the enemy’s superior firepower will destroy them–if they don’t destroy each other first.

We Rule the Night is a powerful story about sacrifice, complicated friendships, and survival despite impossible odds. 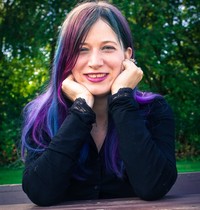 About the author: Claire Eliza Bartlett grew up in Colorado. She studied history and archaeology and spent time in Switzerland and Wales before settling in Denmark for good. When not at her computer telling mostly fictional stories, she works as a tour guide in Copenhagen, telling stories that are (mostly) true.

Review of We Rule the Night by Claire Eliza Bartlett

We Rule the Night is a young adult fantasy novel by Claire Eliza Bartlett. A captivating story of magic that is sure to pull you into a fantasy world unlike any other. They are strong, brave, and determined  Bartlett has created a unique list of characters that are well-developed with creative backstories. Everything about this world and characters is wonderfully planned out and mesh together seamlessly. A story that is full of twists and turns that will keep you second-guessing until the very end. We Rule the Night is the kind of book that once you start you will not be able to put down. Once you start reading the mystery is so intense that you will have to know how it all ends. I highly recommend We Rule the Night to anyone who loves reading young adult fantasy. ** I received a complimentary copy in exchange for my honest and unbiased review. This post contains affiliate links and I will be compensated if you make a purchase after clicking on my links.**