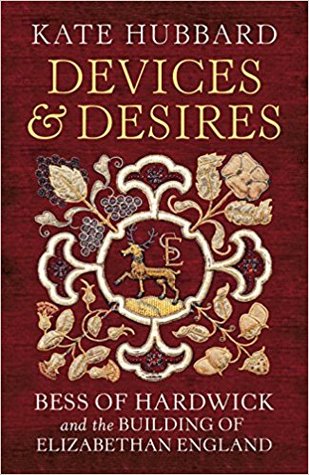 Devices and Desires by Kate Hubbard

The critically acclaimed author of Serving Victoria brilliantly illuminates the life of the little-known Bess of Hardwick—next to Queen Elizabeth I, the richest and most powerful woman in sixteenth-century England.

Aided by a quartet of judicious marriages and a shrewd head for business, Bess of Hardwick rose from humble beginnings to become one of the most respected and feared Countesses in Elizabethan England—an entrepreneur who built a family fortune, created glorious houses—the last and greatest built as a widow in the 70s—and was deeply involved in matters of the court, including the custody of Mary Queen of Scots.

While Bess cultivated many influential courtiers, she also collected numerous enemies. Her embittered fourth husband once called her a woman of “devices and desires,” while nineteenth-century male historians portrayed her as a monster—”a woman of masculine understanding and conduct, proud, furious, selfish and unfeeling.” In the twenty-first century she has been neutered by female historians who recast her as a soft-hearted sort, much maligned and misunderstood. As Kate Hubbard reveals, the truth of this highly accomplished woman lies somewhere in between: ruthless and scheming, Bess was sentimental and affectionate as well.

Hubbard draws on more than 230 of Bess’s letters, including correspondence with the Queen and her councilors, fond (and furious) missives between her husbands and children, and notes sharing titillating court gossip. The result is a rich, compelling portrait of a true feminist icon century ahead of her time—a complex, formidable, and decidedly modern woman captured in full as never before.

About the author: After leaving Oxford University, Kate Hubbard worked variously as a researcher, a teacher, a book reviewer, and a publisher’s reader and a freelance editor.  She currently works for the Royal Literary Fund. She is the author of the acclaimed historical biography Serving Victoria and lives in London and Dorset.

Review of Devices and Desires by Kate Hubbard

Devices and Desires by Kate Hubbard is a captivating and intriguing story that is based on more than 230 of Bess’s letters, including correspondence with the Queen and her councilors, fond (and furious) missives between her husbands and children, and notes sharing titillating court gossip. A story of love, loss, family, and drama. Hubbard writes a story that is sure to take you into a world unlike any other. A world that many will never experience. Vivid realistically written making you feel as if you have traveled back in time to another world. The characters are written so that they remind you of a family member or friend. Devices and Desires is a remarkable read that is perfect for anyone who loves history. ** I received a complimentary copy in exchange for my honest and unbiased review. This post contains affiliate links and I will be compensated if you make a purchase after clicking on my links.**