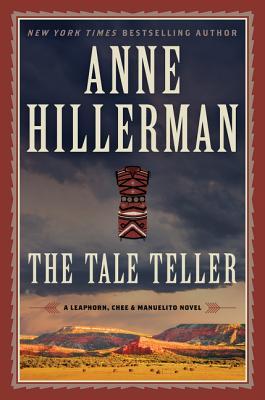 Joe Leaphorn may have retired from the Tribal Police, but he finds himself knee-deep in a perplexing case involving a priceless artifact—a reminder of a dark time in Navajo history. Joe’s been hired to find a missing biil, a traditional dress that had been donated to the Navajo Nation. His investigation takes a sinister turn when the leading suspect dies under mysterious circumstances and Leaphorn himself receives anonymous warnings to beware—witchcraft is afoot.

While the veteran detective is busy working to untangle his strange case, his former colleague Jim Chee and Officer Bernie Manuelito are collecting evidence they hope will lead to a cunning criminal behind a rash of burglaries. Their case takes a complicated turn when Bernie finds a body near a popular running trail. The situation grows more complicated when the death is ruled a homicide, and the Tribal cops are thrust into a turf battle because the murder involves the FBI.

As Leaphorn, Chee, and Bernie draw closer to solving these crimes, their parallel investigations begin to merge . . . and offer an unexpected opportunity that opens a new chapter in Bernie’s life.

About the author: Anne Hillerman’s newest book,”Spider Woman’s Daughter” debuted at number 10 on the New York Times Best Seller list. The novel continues her father Tony Hillerman’s popular Jim Chee/Joe Leaphorn series. The book followed “Tony Hillerman’s Landscape: On the Road with Chee and Leaphorn,” with photos by Don Strel of the country, the renown mystery author visited in his novels. Her cookbook, “Santa Fe Flavors: Best Restaurants and Recipes” received the New Mexico Book Award for the best cookbook of 2009. Anne’s other books include “Gardens of Santa Fe,” “Ride the Wind, USA to Africa,” and “Children’s Guide to Santa Fe.” When she’s not writing, Anne enjoys cooking, writing restaurant reviews for the Albuquerque Journal, and skiing. www.annehillerman.com   –  Goodreads Author Page

Review of The Tale Teller: A Leaphorn, Chee & Manuelito Novel

The Tale Teller is a mystery novel written by Anne Hillerman who continues her father’s series with this new book centered around Bernie Manuelito. A story of mystery and intrigue as Leaphorn takes on the job of investigating missing items from an anonymous donation to the Navajo Nation Museum. While Bernie is investigating a burglary and assisting on a murder case.  The Tale Teller is full of suspense that lurks just beyond the next page lurking just around the corner could be life or death. The characters are vivid and realistic with creative backstories that play an important part in the overall story. This is Hillerman’s fifth book in the series and her father wrote nearly twenty books before her. While this is a series, each book can be read as a standalone novel and know what is going on without feeling lost. I will warn you that once you read one you will be hooked on the mystery of the series and will want to read more. The Tale Teller is the perfect read for anyone who is a fan of mystery novels. ** I received a complimentary copy in exchange for my honest and unbiased review. This post contains affiliate links and I will be compensated if you make a purchase after clicking on my links.**