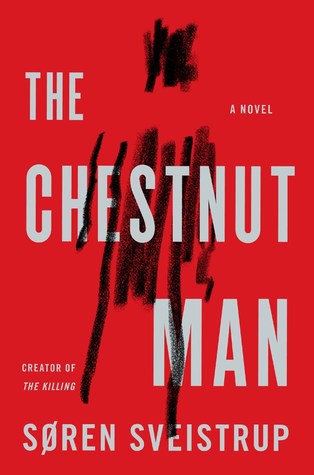 The Chestnut Man by Søren Sveistrup

The heart-pounding debut from the creator of the hit Scandinavian television show The Killing.

If you find one, he’s already found you. A psychopath is terrorizing Copenhagen. His calling card is a “chestnut man”—a handmade doll made of matchsticks and two chestnuts—which he leaves at each bloody crime scene. Examining the dolls, forensics makes a shocking discovery—a fingerprint belonging to a young girl, a government minister’s daughter who had been kidnapped and murdered a year ago. A tragic coincidence—or something more twisted? To save innocent lives, a pair of detectives must put aside their differences to piece together the Chestnut Man’s gruesome clues. Because it’s clear that the madman is on a mission that is far from over. And no one is safe.
Publisher:  HarperCollins Publishers  (September 3, 2019)
ASIN: B07DNCC3CD
ISBN-10: 0062895362
ISBN-13: 978-0062895363

About the author: Søren Sveistrup is an internationally acclaimed scriptwriter of the Danish television phenomenon The Killing which won various international awards and sold in more than a hundred countries. More recently, Sveistrup wrote the screenplay for Jo Nesbø’s The Snowman. Sveistrup obtained a Master in Literature and in History from the University of Copenhagen and studied at the Danish Film School. He has won countless prizes, including an Emmy for Nikolaj and Julie and a BAFTA for The Killing.
Goodreads Author Page   –  Amazon   –   Goodreads

Review of The Chestnut Man

The Chestnut Man is a captivating mystery thriller that is sure to keep you up at night. A crime thriller that will send chills up your spine with each page you read!  The Chestnut Man is the debut novel by Soren Sveistrup who is the author behind the smash hit Danish series The Killing. Sveistrup has written a novel that reads more like a movie full of mystery, suspense, and non-stop action with excellent writing that draws you in and holds your attention until the end. A story full of twists and turns with an unexpected ending you will never leave you speechless. The Chestnut Man is a wonderful read that I recommend for fans of crime thrillers that keep you on the edge of your seat! ** I received a complimentary copy in exchange for my honest and unbiased review. This post contains affiliate links and I will be compensated if you make a purchase after clicking on my links.**