Dark ‘N’ Deadly (Federal K-9 #3) by Tee O’Fallon – ATF Special Agent Eric Miller and his explosives detecting K-9, Tiger, pull over a truck, the contents of which are explosive. Literally. More shocking, the driver is the kid brother of a woman he left behind. One who still haunts his days and his nights.

They’d never so much as kissed, but Tess McTavish never forgot the handsome, dangerous agent who vanished in a shroud of mystery. Now the last thing she needs is an ATF agent with his own agenda. Doesn’t matter that Tess and her brother are innocent. If Eric learns the truth of their past, they’ll never be free.

Eric’s drive for revenge against the man who targeted him and his colleagues in a deadly explosion still burns hot inside him. Another bomb is about to be detonated and he’s sure there’s a connection between that man…and Tess’s family. But Eric and Tiger will do everything they can to protect the woman he’s falling for from what’s coming… 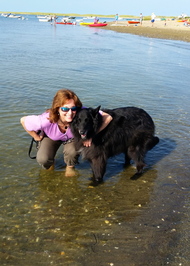 About the author: (from Goodreads.com) Tee O’Fallon has been a federal agent for twenty-three years, and is now a police investigator, giving her hands-on experience in the field of law enforcement that she combines with her love of romantic suspense. Tee’s job affords her the unique opportunity to work with the heroic men and women in law enforcement on a daily basis. Besides writing, Tee loves cooking, gardening, chocolate, lychee martinis, and all creatures canine.

Tee is the author of the Federal K-9 Series and the NYPD Blue & Gold Series. Visit www.teeofallon.com to sign up for newsletters, contests, and to keep tabs on Tee’s latest releases, including her next novel, Armed ‘N’ Ready, Federal K-9 #2..

Dark ‘N’ Deadly is the third book in the Federal K-9 series by Tee O’Fallon and is a romantic suspense. A story that is full of drama, action, steamy romance, and twists and turns around every corner. O’Fallon pulls you into an action-packed world where chemistry and attractions cannot be ignored. When secrets and lies that were once buried deep come to light will they survive? Let’s not forget about the possible bomb threat that could destroy everything. Dark ‘N’ Deadly is an emotional roller coaster of a ride that is sure to keep you turning the pages as fast as possible. You will not want to put this one down. While Dark ‘N’ Deadly is part of the Federal K-9 series, it can easily be read as a standalone. I look forward to reading the next book in the Federal K-9 series. *I received a complimentary copy in exchange for an honest and unbiased review.*