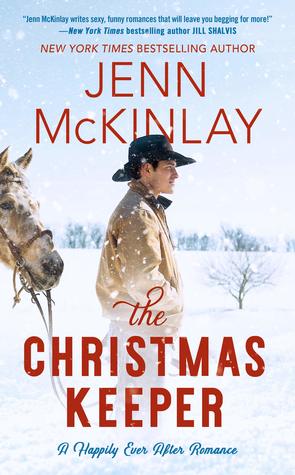 The Christmas Keeper by Jenn McKinlay – True love and holiday cheer combine for an unforgettable romance in this second Happily Ever After novel featuring a North Carolina bookstore from the New York Times bestselling author of The Good Ones. All he wants for Christmas…

The second Joaquin Solis saw Savannah Wilson, he knew she was destined to be his wife. Unfortunately, Savannah’s sights are set on a happily-ever-after of another kind: skewering the boss who got her fired. Until then, she won’t act on the scorching sexual chemistry that is brewing between them, leaving Joaquin scrambling to find a way to capture her heart.

When the opportunity arises to use his ranch to boost Savannah’s publicity career, Joaquin doesn’t hesitate to invite her into his world at Shadow Pines and woo her with all of his Christmas loving mojo. It’s a gamble since the holidays aren’t really Savannah’s thing and helping her might also mean losing her as she plans to shake the dust off of their quaint town in North Carolina and head back to New York City the first chance she gets.

But Joaquin believes in the magic of Christmas and he knows with a little help from his friends at the Happily Ever After Bookstore, he can convince the woman of his dreams that he’s a keeper…

About the author: (from Goodreads.com) Jenn is the New York Times and USA Today bestselling author of several mystery series and will be debuting a new women’s fiction series in June 2017, starting with the title About a Dog. She lives in sunny Arizona in a house that is overrun with kids, pets and her husband’s guitars. www.jennmckinlay.com

Review of The Christmas Keeper

The Christmas Keeper is the second book in the Happily Ever After series by Jenn McKinlay. A fun fast-paced Christmas romance that is heartwarming and full of holiday spirit. This sexy, sassy and humorous cowboy uses all his charm to sweep the only woman who has ever made his knees weak off her feet. Can she resist the sexy cowboy who believes in the magic of Christmas? McKinlay has written a sweet, well-paced romance that is perfect for the Christmas season and sure to get you in the holiday spirit. I enjoyed reading The Christmas Keeper that is both sweet and spicy! *I received a complimentary copy in exchange for an honest and unbiased review.*

Savannah slipped into the elf costume and was surprised and delighted to find that the dress actually had pockets. So that was something. She glanced at her reflection in the mirror. It was not good.

The striped stockings were not flattering, and the length of the dress on her tall frame made it a mini-dress. She cinched the wide black belt in a desperate attempt to show she had a waistline but the Peter Pan collar still made her look like a doofus. To top it all off, her pointy hat had a jingle bell on the end of it and it rang with every step she took. Ridiculous.

She stomped out of the bathroom and through the office. Whose idea was this Santa-and-elf thing? Shouldn’t they have run it by her?

She found Maisy and “Santa” on the front porch. He was leaning over the railing and waving at cars that drove by and calling, “Ho ho ho.”

“Oh, you look so cute,” Maisy cried. Joaquin turned around and took in the sight of Savannah. The grin beneath his bushy white beard was wide.

“Don’t!” She pointed at him. “If anyone is laughing at anyone, I’m laughing at you because you’re wearing a fake beard and a belly pillow.”

“Better than fake ears,” he said. He lifted a white-gloved finger and poked the pointy ear sewn into her hat. She smacked his hand away.

“Stop that,” she said. She turned to Maisy. “You owe me so huge for this.”

“No doubt,” Maisy said. “This is definitely above and beyond, especially for someone as ambivalent about the holidays as you. I really appreciate your digging deep and taking one for the team.”

“Come on,” Joaquin said. “Let’s go out to the street and see if we can wave people in.”

“What? No!” Savannah protested. It was bad enough people coming to the shop might see her but if they stood on the street everyone would see her in this ridiculous getup.

“What’s your elf name?” Joaquin asked as he walked

“I don’t have an elf name,” she snapped.

“Then let’s make one,” he said. “How about Snickerdoodle Jingle Bells?”

“No.” She gave him a grumpy look to mask the laugh that almost escaped.

“I know.” He snapped his gloved fingers but no sound came out. “Mistletoe Merrybottom.”

“Shut up.” This time a snort escaped and he grinned at her. She ignored him. “You can call me Elf. It’s a nice gender-neutral name that’s easy to remember.”

“Boring.” He rolled his eyes but he didn’t argue. He continued down the walkway then  began to walk toward the center of town. Savy hurried to catch up to him.

“What are you doing?” she asked.

“Going where there’s more foot traffic,” he said. “We need to be on the corner to direct shoppers toward the bookstore.”

Savy was not having it. She stopped walking. It took Joaquin a couple of paces to realize she wasn’t behind him. He paused and looked back at her.

“I am not going to stand in the center of town dressed like an elf,” she said. “Public humiliation was not a part of the bargain when I came to help Maisy out.”

He studied her for a moment. He looked as if he was undecided as to what to say. Savy almost told him not to bother since there was nothing he could say that would change her mind.

Finally, he just sighed and continued walking. “Suit yourself,” he said. “But since it’s going to take a Christmas miracle to save Maisy’s bookstore, I, for one, am willing to make an ass of myself if it helps her keep her shop.”