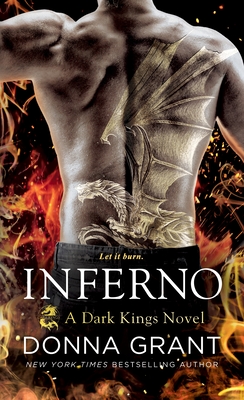 I knew what I wanted. And nothing was going to stop me.

King of Dragon Kings. Driven, ruthless, shrewd. The weight of survival for Constantine and his brethren has pushed him to set aside his own yearnings—for now. He’s the most powerful of all Dragon Kings, and Con will stop at nothing to destroy anyone who dares to threaten his existence.

For years, Con has hidden his pain—his desperation—for there is one smoldering beauty that he craves above all else, even if he feels he doesn’t deserve her. However, his enemies are at every corner. There is no one left to trust. But none of that matters anymore: There is only one thing that Con wants. With this one woman by his side, he can fight for the freedom of his fellow men-in-arms. All Con has to do is get her to surrender her heart…and be his for all time.

About the author: New York Times and USA Today bestselling author Donna Grant has been praised for her “totally addictive” and “unique and sensual” stories. She’s written more than thirty novels spanning multiple genres of romance including the bestselling Dark King stories, Dark Craving, Night’s Awakening, and Dawn’s Desire. Her acclaimed series, Dark Warriors, feature a thrilling combination of Druids, primeval gods, and immortal Highlanders who are dark, dangerous, and irresistible. She lives with her two children, a dog, and four cats in Texas. https://donnagrant.com/

Inferno is the eighteen book in the Dark Kings series by Donna Grant. A steamy paranormal romance that sweeps you away to a world of fantasy and mystery. Inferno is a fast-paced read that can easily be read as a standalone novel. The characters are well-written, mysterious, and intriguing. They pull you into the story from the beginning and hold your attention until the end. I started reading the Dark Kings series from the beginning and cannot wait to read the next book in the series! *I received a complimentary copy in exchange for review.*