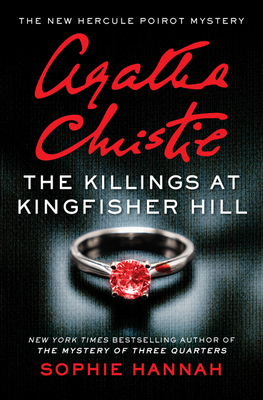 The Killings at Kingfisher Hill by Sophie Hannah – The world’s most beloved detective, Hercule Poirot—the legendary star of Agatha Christie’s Murder on the Orient Express and Death on the Nile—returns in a delectably twisty mystery.

Hercule Poirot is travelling by luxury passenger coach from London to the exclusive Kingfisher Hill estate. Richard Devonport has summoned him to prove that his fiancée, Helen, is innocent of the murder of his brother, Frank. There is one strange condition attached to this request: Poirot must conceal his true reason for being there from the rest of the Devonport family.

On the coach, a distressed woman leaps up, demanding to disembark. She insists that if she stays in her seat, she will be murdered. A seat-swap is arranged, and the rest of the journey passes without incident. But Poirot has a bad feeling about it, and his fears are later confirmed when a body is discovered in the Devonports’ home with a note that refers to ‘the seat that you shouldn’t have sat in’.

Could this new murder and the peculiar incident on the coach be clues to solving the mystery of who killed Frank Devonport? And can Poirot find the real murderer in time to save an innocent woman from the gallows?

About the author: Sophie Hannah is an internationally bestselling writer of psychological crime fiction, published in 27 countries. In 2013, her latest novel, The Carrier, won the Crime Thriller of the Year Award at the Specsavers National Book Awards. Two of Sophie’s crime novels, The Point of Rescue and The Other Half Lives, have been adapted for television and appeared on ITV1 under the series title Case Sensitive in 2011 and 2012. In 2004, Sophie won first prize in the Daphne Du Maurier Festival Short Story Competition for her suspense story The Octopus Nest, which is now published in her first collection of short stories, The Fantastic Book of Everybody’s Secrets.

Sophie has also published five collections of poetry. Her fifth, Pessimism for Beginners, was shortlisted for the 2007 T S Eliot Award. Her poetry is studied at GCSE, A-level and degree level across the UK. From 1997 to 1999 she was Fellow Commoner in Creative Arts at Trinity College, Cambridge, and between 1999 and 2001 she was a fellow of Wolfson College, Oxford. She is forty-one and lives with her husband and children in Cambridge, where she is a Fellow Commoner at Lucy Cavendish College. She is currently working on a new challenge for the little grey cells of Hercule Poirot, Agatha Christie’s famous detective. https://sophiehannah.com/

Review of The Killings at Kingfisher Hill

Sophie Hannah emulates many aspects of the classic golden age of crime in her resurrection of Agatha Christie’s famous Belgium detective, Hercule Poirot. A great little mystery that will get the little grey cells working. It’s the perfect way to celebrate the hundredth anniversary of the detective’s first appearance. I’m a big fan of Agatha Christie’s books and enjoyed all of Sophie Hannah’s Poirot novels. The Killings at Kingfisher Hill is an excellent read and an interesting country house mystery.  *I received a complimentary copy in exchange for a review.*