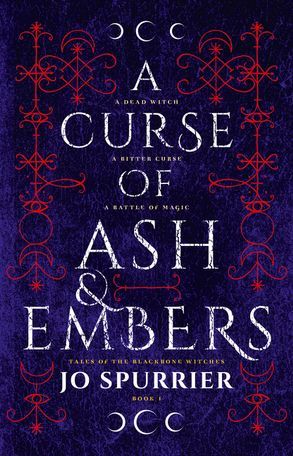 A Curse of Ash and Embers (Tales of the Blackbone Witches #1) by Jo Spurrier – A dead witch. A bitter curse. A battle of magic. Some people knit socks by the fire at night. Gyssha Blackbone made monsters. But the old witch is dead now, and somehow it’s Elodie’s job to clean up the mess.

When she was hired at Black Oak Cottage, Elodie had no idea she’d find herself working for a witch; and her acid-tongued new mistress, Aleida, was not expecting a housemaid to turn up on her doorstep.

Gyssha’s final curse left Aleida practically dead on her feet, and now, with huge monsters roaming the woods, a demonic tree lurking in the orchard and an angry warlock demanding repayment of a debt, Aleida needs Elodie’s help, whether she likes it or not.

And no matter what the old witch throws at her, to Elodie it’s still better than going back home.

About the author: Jo was born in 1980 and has a Bachelor of Science, but turned to writing because people tend to get upset when scientists make things up. Her hobbies include knitting, spinning, cooking and research. She lives in Adelaide with her husband and spends a lot of time daydreaming about snow. Website: www.jospurrier.com.au

A Curse of Ash and Embers is the first book in the Tales of the Blackbone Witches series by Jo Spurrier. An intriguing young adult paranormal fantasy that pulls you into the world of witches and magic. A Curse of Ash and Embers has great characters and an action-packed story of two witches trying to clean up the messes made by an evil dead witch who’s not quite done yet. The kind of book you don’t want to end, so you try and read it slowly to suck it all in. *I received a complimentary copy in exchange for a review.*