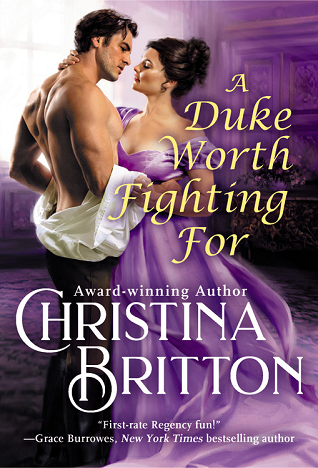 A Duke Worth Fighting For (Isle of Synne, #3) by Christina Brit – To protect the dukedom from an incompetent and greedy cousin, Daniel Hayle, Duke of Carlisle, has promised to find a bride in London this season. But the idea of facing ballrooms and card parties is as intimidating as any battlefield in France, including the fight at Waterloo that left him terribly scarred. Perhaps a month on the Isle of Synne can provide him with the practice necessary to find a wife who can tolerate him enough to give him an heir.

Margery Kitteridge has been mourning her husband for four years, and while she’s not ready to consider marriage again, she does miss intimacy with a partner. When Daniel asks for help navigating Synne’s social scene, and they accidentally kiss, she realizes he’s the perfect person with whom to have an affair. As they begin to confide in one another, Daniel discovers that he’s unexpectedly connected to Margery’s late husband, and she will have to decide if she can let her old love go for the promise of a new one.

About the Author: Christina Britton developed a passion for writing romance novels shortly after buying her first at the tender age of thirteen. Though for several years she turned to art and put brush instead of pen to paper, she has returned to her first love and is now writing full time. She spends her days dreaming of corsets and cravats and noblemen with tortured souls. She lives with her husband and two children in the San Francisco Bay Area. A member of Romance Writers of America, she also belongs to her local chapter, Silicon Valley RWA, and is a 2017 RWA® Golden Heart® Winner. www.christinabritton.com

Review of A Duke Worth Fighting

A Duke Worth Fighting For is the third book in the Isle of Synne series by Christina Britton. The story focuses on the main character Margery, who we meet in book one. She soon becomes friends with newcomer Daniel, the Duke of Carlisle. The chemistry is undeniable, and sparks soon fly between the two. While this is part of the  Isle of Synne series, it can easily be read as a standalone. There is some time devoted to bringing back previous main couples and giving the reader glimpses into their continuing happily ever afters, but this was Margery and Daniel’s story. *I received a complimentary copy in exchange for a review.*