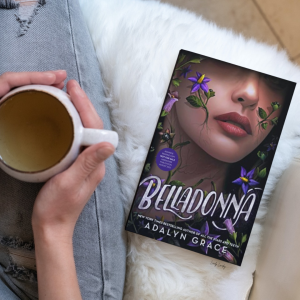 Orphaned as a baby, nineteen-year-old Signa has been raised by a string of guardians, each more interested in her wealth than her well-being—and each has met an untimely end. Her remaining relatives are the elusive Hawthornes, an eccentric family living at Thorn Grove, an estate both glittering and gloomy. Its patriarch mourns his late wife through wild parties, while his son grapples for control of the family’s waning reputation and his daughter suffers from a mysterious illness. But when their mother’s restless spirit appears claiming she was poisoned, Signa realizes that the family she depends on could be in grave danger and enlists the help of a surly stable boy to hunt down the killer.

However, Signa’s best chance of uncovering the murderer is an alliance with Death himself, a fascinating, dangerous shadow who has never been far from her side. Though he’s made her life a living hell, Death shows Signa that their growing connection may be more powerful—and more irresistible—than she ever dared imagine.

About the author: Adalyn Grace is a New York Times bestselling author of All the Stars and Teeth, which was named “2020’s biggest YA fantasy” by Entertainment Weekly.

Prior to becoming an author, Adalyn spent four years working in live theatre, acted as the managing editor of a nonprofit newspaper, and studied storytelling as an intern on Nickelodeon Animation’s popular series The Legend of Korra.

Local to San Diego, Adalyn spends her non-writing days by watching too much anime, and by playing video games with her bossy cat and two dorky dogs. www.adalyngraceauthor.com

Belladonna by Adalyn Grace is a dreamy combination of fantasy meets mystery with paranormal and gothic elements. Grace’s writing style is beautifully smooth and flows at a steady pace with intricate worldbuilding that is intriguing. The descriptions of settings are so well detailed that I could easily see the world she created. The storyline has the perfect blend of romance, mystery, and magic with an ending that will take you by surprise. Belladonna reads like a movie, and I did not want to put this one down!  *I received a complimentary copy in exchange for a review.*